Transitions from VMs to Containers# 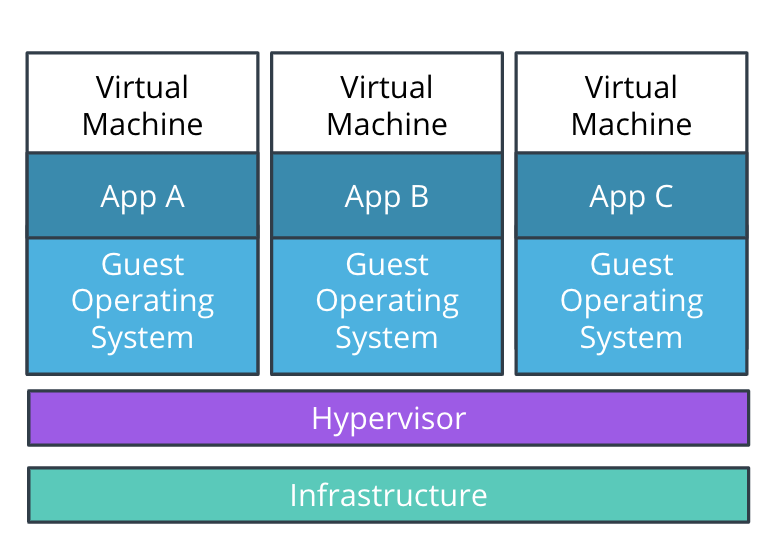 A Dockerfile is a set of instructions used to create a Docker image. Each instruction is an operation used to package the application, such as installing dependencies, compile the code, or impersonate a specific user.

A Docker image is composed of multiple layers, and each layer is represented by an instruction in the Dockerfile.

All layers are cached and if an instruction is modified, then during the build process only the changed layer will be rebuild. As a result, building a Docker image using a Dockerfile is a lightweight and quick process.

To construct a Dockerfile, it is necessary to use the pre-defined instructions, such as:

Below is an example of a Dockerfile that targets to package a Python hello-world application:

Once a Dockerfile is constructed, these instructions are used to build a Docker image. A Docker image is a read-only template that enables the creation of a runnable instance of an application. In a nutshell, a Docker image provides the execution environment for an application, including any essential code, config files, and dependencies.

A Docker image can be built from an existing Dockerfile using the docker build command. Below is the syntax for this command:

For example, to build the image of the Python hello-world application from the Dockerfile, the following command can be used:

Before distributing the Docker image to a wider audience, it is paramount to test it locally and verify if it meets the expected behavior. To create a container using an available Docker image, the docker run command is available.

Below is the syntax for this command:

For example, to run the Python hello-world application, using the created image, the following command can be used:

To retrieve the Docker container logs use the docker logs {{ CONTAINER_ID }} command. For example:

The last step in packaging an application using Docker is to store and distribute it. So far, we have built and tested an image on the local machine, which does not ensure that other engineers have access to it.

As a result, the image needs to be pushed to a public Docker image registry, such as

However, there might be cases where an image should be private and only available to trusted parties. As a result, a team can host private image registries, which provides full control over who can access and execute the image.

Before pushing an image to a Docker registry, it is highly recommended to tag it first. During the build stage, if a tag is not provided (via the -t or --tag flag), then the image would be allocated an ID, which does not have a human-readable format (e.g. 0e5574283393). On the other side, a defined tag is easily scalable by the human eye, as it is composed of a registry repository, image name, and version. Also, a tag provides version control over application releases, as a new tag would indicate a new release.

To tag an existing image on the local machine, the docker tag command is available. Below is the syntax for this command:

For example, to tag the Python hello-world application, to be pushed to a repository in DockerHub, the following command can be used:

Once the image is tagged, the final step is to push the image to a registry. For this purpose, the docker push command can be used. Below is the syntax for this command:

For example, to push the Python hello-world application to DockerHub, the following command can be used:

Explore how to build and run a Docker image, with a list of all available options: